It is my personal aim that by compiling the information regarding Stroke treatment, TCM practitioners in Switzerland and in the region who treat Stroke patients could obtain useful information from this paper.

In TCM, Strokes can be classified into Jing Luo (Meridian) Strokes and ZhangFu Strokes, it depends on the level of injury done to the nerves.

In the Nei Jing 《内经》 and Jin Gui Yao Lue 《金匮要略》, Strokes are already mentioned, and under different names.

The attacks of Stroke could be in all seasons, but, in Winter and in Spring, more attacks are reported.

TCM offers possibilities to treat Stroke patients, to help them in better and quicker recovery after the attack. TCM treatments could be used as well as a mean to prevent the attacks of Stroke.

In western medicine, Ischemic and hemorrhagic (Intracerebral Hemorrhage, Subarachnoid Hemorrhage) Strokes, transient ischemic attack (TIA) are within the scope of this paper.

Stroke is characterised by blockage or bleeding of the Blood vessels that lead to injury of nerves.

Stroke patients could suffer from:

Stroke patients could also have complaints such as:

Tongue:
stiff, and/or twisted to one side, the body of the tongue could be dark red with purple dots, the coating could be white or yellow, with or without sticky coating
Pulse:
tight, round or thin

The patient could suffer from simply tendency to sleep a lot or unclear in the mind when awake till complete loss of consciousness.

2. Half side of the body paralysed

At the later stage of the disease, the patient suffers normally from the stiffness of the extremities, especially the joints involved, difficulties to move the joints are commonly seen among these patients.

3 Mouth and tongue twisted to one side

This normally happens with patients who are paralysed half side of the body, the tongue twisted normally to the paralysed side. Some patients are unable to control their saliva as well.

4. Unclear speech or loss the capacity to speak

The Stroke patients suffer from unclear and / or very slow speech to unable to speak completely. Some patients had warning sign before the attack of the stroke, occasionally, they lost the ability to speak.

Bleeding in the stuhl, vomiting of Blood refer to warning with alarm signals.

In TCM terminology, the rebellious Qi and Blood are the main triggers for Strokes.

The disease starts in the brain, it is closely related to the heart, kidneys, liver and spleen.

Yin and Blood deficiency could be due to the aging process or suffering a long standing diseases. Yin Qi deficient implies that the moving force for Blood is not there, thus resulted in blockage in the Blood vessels in general, for the case of Stroke, the blockage is also in the brain. Yin Blood deficient implies that the control of Yang can not be assured, thus resulted in internal wind, additionally, if phlegm precondition exists, this increases the risk for Stroke attack.

With exhaustion, Yang Qi is out of control, it expands upwards, thus creates wind, in addition, if phlegm and Blood Stasis present as well, this increases the risk for Stroke attack.

Dysfunction of spleen could be:

These conditions weaken the spleen and create the phlegm condition. Note that liver fire could also turns body fluids into Phlegm.

Repressed anger and many other emotional disturbances could put the meridian system out of balance, in particular, the liver and the heart in the case for Stroke.

CT or MRI can help to confirm the Stroke attack.

Based on the degree of the injury of the nerves and the state of consciousness of the patient, Strokes can be classified into Jing Luo (Meridian) Stroke or Zhang Fu Stroke.

Strokes in the Luo refer to loss of feeling or motor weakness on one side of the extremities, the patients could also suffer from mouth and tongue twisted to one side.

Both strokes in the Jing and in the Luo are termed as Jing Luo Strokes, in these cases, the patients are in conscious state.

Zhang Fu Strokes, the patients have lost their conscious state, with one side of the body paralysed, mouth and tongue twisted to one side, unclear speech or loss the capacity to speak.

After the Stroke attack, TCM distinguishes the following three phases:

Wei (痿) disease: Wei (痿) disease could have extremities paralysed, weakness of the extremities, in most cases, with slow onset. The patients are conscious. Mostly both legs or both hands or both hands and legs. Muscle atrophy is also seen in most cases. In Stroke patients, muscle atrophy is also seen in patients due to lack of use of the muscle, mostly in the resistant recovery phase.

Ben deficiency and Biao excess are common characteristics in all Stroke patients.

In the recovery and resistant recovery phases, Ben deficiency is predominant:

For Zhang Fu Strokes, Bi (闭) and Tuo (脱) could be further distinguished:

Progression of the disease

In the acute phase, stroke patients manifest mostly with excess in the Biao, in this phase, treat the Biao, treatment centred in elimination of the pathogenic Qi, methods such as pacify the liver, eliminate wind, clear phlegm heat, resolve phlegm to free the path way of Fu organs. Invigorate Blood to free the Luo channels. Awaken the Shen and open the orifice are often used.

For strokes with Bi (闭) and Tuo (脱) nature, eliminate the pathogenic Qi is not sufficient, it is a must to support the upright Qi as well.

In the recovery and the resistant recovery phases, excess and deficiency both exist in most cases, it is also necessary to eliminate the pathogenic Qi and at the same time to support the upright Qi. Methods such as: nourish the Yin and eliminate the Wind, nourish the Qi, invigorate Blood are used.

Half side of the body paralysed or loss of feeling, mouth and tongue twisted to one side, unclear speech or loss the capacity of speech, dizziness. Dark tongue body, with thin white coat or sticky white coat.

The symptoms stated in 1plus red face and red eye, bitter taste in the mouth, dry Stuhl, irritable. Tongue body is red, with thin yellow coating. Pulse is tied and forceful.

Pacify the liver, eliminate the fire and free the channels

The symptoms stated in 1 plus swollen abdomen, lot of phlegm in the body, tongue body is red dark, coating is yellow with or without sticky coating. Pulse is forceful and tied, or only forceful at the paralysed side.

The symptoms stated in 1 plus pale face, no force, uncontrolled saliva, sweating, swollen legs and hands, Tongue colour is dark, with thin white or white and sticky coat. Pulse is thin and deep, could be slow or/and tied.

Same as case 1 plus insomnia, tinnitus, five palms heat, red tongue body, with little or no coating. Pulse is thin, could be quick.

Nourish the liver and the kidneys, eliminate the wind.

Sudden onset, loss of consciousness, half side of the body paralysed, mouth twisted to one side, stiffness in extremities, both hands hold tied on objects, often suffer from cramps. Tongue body is red, coating is either yellow and dry or black and dry. Pulse is tied and fast.

Clear fire and eliminate wind, awaken the Shen and open the orifice.

Sudden onset, loss of consciousness, half side of the body paralysed, mouth twisted to one side, stiffness in extremities, heat feeling on the back, irritated, often suffer from cramps, constipation. Tongue body is red, coating is either yellow and sticky or yellow and dry. Pulse is tied and forceful.

Clear fire and resolve phlegm, awaken the Shen and open the orifice.

Sudden onset, loss of consciousness, half side of the body paralysed, mouth twisted to one side, pale face, cold extremities. Tongue body is dark, coating is either white and / or sticky. Pulse is deep and slow.

Dry the dampness and resolve phlegm, awaken the Shen and open the orifice.

Same as case 1 plus loss of consciousness, heavy sweating, cold limps, uncontrolled of urination and defecation. Tongue body is purple, with white and sticky coating, pulse is deep and weak.

Nourish the Qi, rescue the Yang and consolidate the Tuo (脱).

TCM Treatments with Herbs and Acupuncture

A strong or weak constitution of the patient, the state of the upright Qi, the severity of the illness, if the treatment is done at the acute state with continue rehabilitation program after, all these influence how well the patients will recover.

It is essential to observe the warning signs and sign up for treatments in time to prevent the Strokes.

A good care system will reduce the death rate for Stroke patients. After the acute phase, speech therapy, Tui Na, physiotherapy could assist in helping the recovery process or to maintain the current state.

In the TCM hospitals of Bei Jing, Wu Han and Inner Mongolia, during my clinical training weeks, Stroke and Facial Paralysis patients were treated with Herbs and Acupuncture. In Hohhot city, the state TCM hospital has made their own secret herbal formula to treat these patients.

Goh Leong Bee, through his more than 30 years of TCM practice, reported that when the patients seeks help within 2 months after the Stroke attack, there is a chance that the patients will gain until 90% of their mobility capacity. He holds also that the family support plays an important role for the recovery process.

Writing this paper does not suggest that I have rich clinical experience in treating Stroke patients.

However, I am persuaded that Stroke patients in Switzerland and in the region should be provided with TCM as one option when they are looking for help.

I thank you for giving me the chance to present the paper here and that you take time to come for this talk or reading this paper.

Note that some of the prescriptions below contain animal products, please check with your local health authority if you are allowed to use them where you are located. In China, animal products are regarded as part of the Chinese Materia Medica based on a long traditional usage and observation.

Below are prescriptions where you might need to write the individual components when you order the herbs for your patients.

1 In the original formula, Saiga tatarica Linnaeus is used instead of Bubali, Cornu [*], Shui Niu Jiao

Appendix B: Localisation of Some Relevant Points For Stroke Treatment 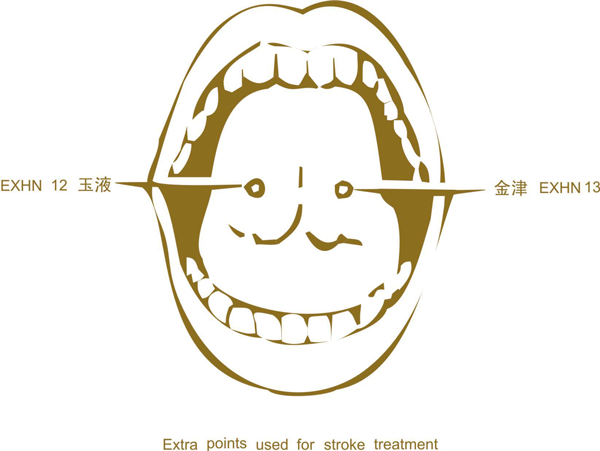 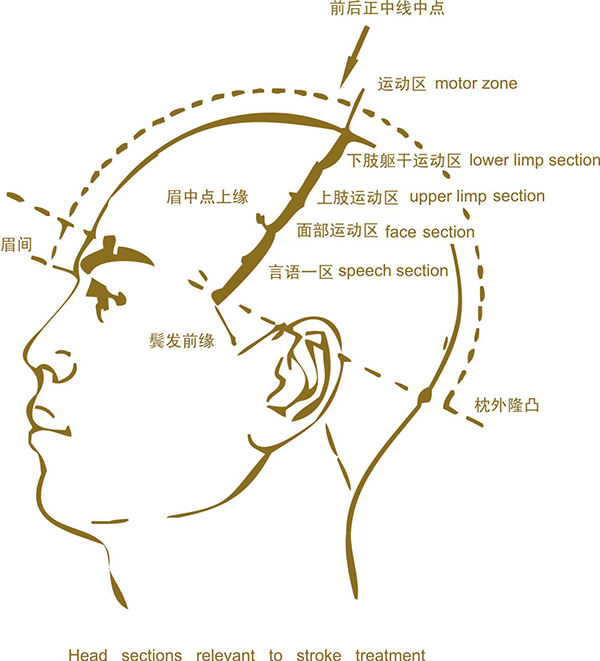 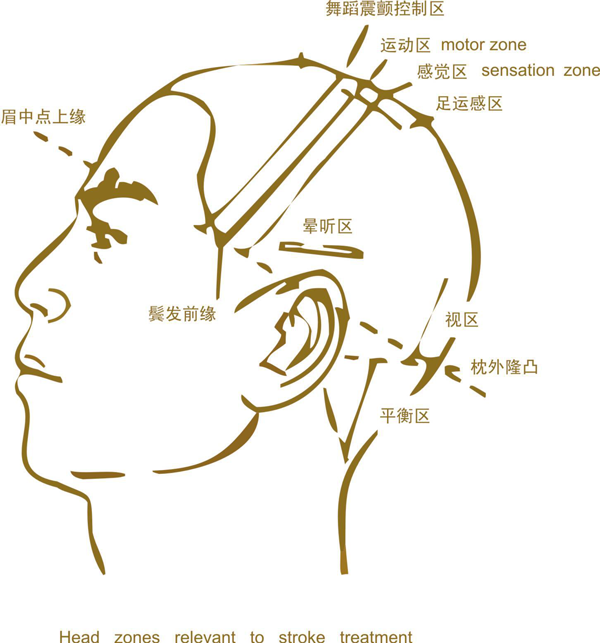 Tui Na (推，按， 捻， 拿，擦) should be done on the side where the extremities are paralysed, from the face, down to the back and both extremities.

Tui Na treatment might profit from the experience gained with Bobath-Koncept [8] in Physiotherapy. This investigation is yet to be done, hopefully this paper inspires you to do this work.